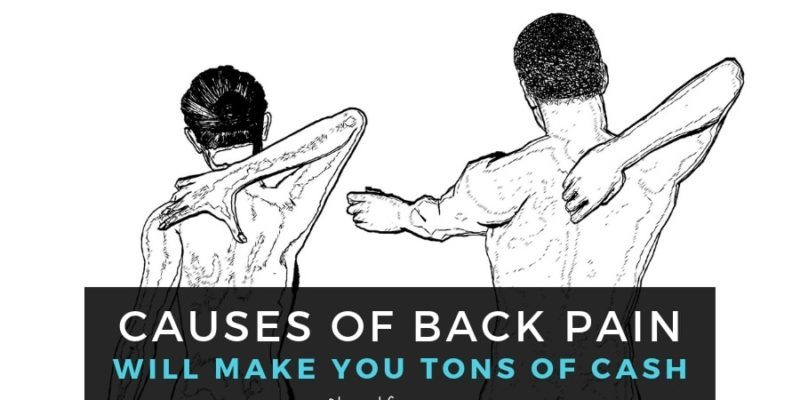 In the past it was believed that the pain appeared because there was some alteration of the structure of the spine, such as scoliosis or herniated disc.

The pain appears by a neurological mechanism that involves the activation of the nerves that transmit the pain and the onset of muscular contracture and inflammation. Sometimes it can also lead to compression of the nerve root.

This mechanism can be triggered by an alteration of the spine structure, such as herniated disc, but in most cases, it is not possible to find out the initial cause that triggers it and is attributed to pain by contracture or overload Muscle.

Back pain is the result of a process that follows these 4 steps:

The nerve fibers that transmit pain are fine and very numerous.

In the back, for example, there are terminations of these fibers in the muscles, in the outer part of the fibrous wrapping of the disc, and in the bone that is below the facet joint (each vertebra is articulated with the inferior one in front, by the disc Intervertebral, and from behind, through factory articulation).

Pain nerves, when activated, release different substances called “neurotransmitters ” or “neuromodulators ” that transmit that sensitivity to the brain.

Muscular contracture consists of persistent and involuntary contraction of a muscle. maybe the consequence or causes of Back Pain.

As a cause of back pain, contracture appears essentially when the muscle is required to work higher than it can do, either intense and punctual work.

For example, excessive exertion; Or reiterated and less intense, for example, to maintain many hours an inadequate posture.

On the other hand, some abnormalities of the spine or imbalances of the muscles favor that muscle groups are constantly working more than necessary, which predisposes them to contracture.

This is the case when the muscles are lacking power and are required to make efforts that exceed their capacity.

It is essential to make the appropriate physical exercise for each specific case, in order to counteract that trend and avoid recurrence of crises.

As a result of back pain: Regardless of their reason, the back pain itself can cause muscular contracture by a reflex mechanism.

In these cases, contracture is not the primary cause of pain, but it is an added factor that can aggravate it. In addition, it may worsen some of its causes. For example, in a painful disc herniation, muscular contracture can increase the compression strength on the disc and facilitate the exit of the pulp nucleus.

The inflammation consists essentially of a large dilation of the blood vessels along with an opening of its pores, allowing the passage of liquid, substances, and cells from the blood to the tissues so that they increase in volume and temperature.

The activation of pain nerves causes the release of several neurotransmitters that dilate the vessels and open their pores, triggering the inflammation of the tissue in which they are released. This is the call “neurogenic inflammation“.

In certain circumstances, especially in the presence of microbes, some cells of the blood are activated releasing substances that attract other cells of defense of the organism, dilate the vessels, open their pores and allow the passage of those cells to the Tissues. That’s known as “humoral inflammation“.

It has been shown that the inflammation neurogenic and humoral are potentiated among themselves and that both processes are involved in back pain. That explains the efficacy of anti-inflammatory drugs for their treatment.

A) because the substances released in the start-up of humoral inflammation are able to activate the nerves of pain and increase it. In turn, the pain involves the release of neurotransmitters involved in neurogenic inflammation, which increases inflammation and constitutes a vicious circle.

b) because increasing the volume of tissues increases the risk of nerve compression and may aggravate the eventual causing injury.

The compression of a nerve root can cause pain. In this case, the patient notices the pain in the territory whose sensitivity collects the root, and not in the place where it is being compressed.

For example, when a herniated lumbar disc compresses a root of the sciatic nerve, the patient notices the pain in the leg, and not where the root is being compressed.

This is called “irradiated pain“, follows the path of the compressed nerve and is accompanied by other signs that reflect its compressions, such as alterations of sensitivity, strength or reflexes.

But sometimes the back pain itself can make you feel a reflex pain in your arms or legs without the nerve being compressed.

It is due to a bone marrow reflex mechanism, referred to as ‘pain referral‘ and does not specifically follow the path of any nerve, nor is it accompanied by signs of compression.

The pain referred to is of no greater importance. However, an irradiated pain translates the compression of a nerve and, therefore, some degree of neurological suffering. You have to assess the indication of the surgery if you can determine with certainty what is compressing the nerve and where.

Finally, a nerve may be compressed and not cause pain. For example, when the compressed nerve is one of those that control a muscle and does not transmit sensitivity.

In that case, even if the nerve is suffering there may not be pain and the patient notices only a very important or even total loss of strength in the corresponding muscle since although the muscle itself is healthy it does not receive the impulses it is ordered to contract.

If that happens, it translates an important compression of the nerve and it is usually necessary to treat it urgently.

The micro bag has elaborated a great detail about the living room chair for back pain.

Symptoms of Being Too High on Marijuana

Is Marijuana Legal In California?

Gynecomastia or Male Breast Reduction: Important to Treat to Avoid the Awkwardness